Captaris has agreed to acquire Oce Document Technologies (ODT) for some $15 million net, when considering ODT's $29 million in the bank. ODT brings fax-server market leader Captaris some serious document capture technology as it attempts to transition into the world of document capture. We first learned of Captaris' close ties with ODT when discussing a new capture-for-SharePoint module that is being introduced for their RightFax product. [See article in our latest issue.]

The deal also includes Captaris accepting responsibility for some $17 million in retirement and bonus obligations, so it will end up costing Captaris somewhere around $30 million. For this, Captaris' receives a 180-employee company, headquartered in Constance, Germany, with a run-rate of approximately $33 million. This is down from the 300-employee, $40 million company that we reported Oce acquired when it bought CGK in 2000 [see DIR 5/5/00]. Oce, does, however, through ODT's CGK roots, continue to develop some of the premier OCR/ICR technology for data capture on the market. Almost all the market leaders in the IDR and forms processing space utilize ODT's technology. It will be interesting to see how Captaris manages these relationships, while at the same time pursues its own distributed capture initiatives.

In North America, ODT focuses primarily on OEM sales, while in Germany, it has a full-service capture solutions business.
Posted by DIReditor at 3:29 PM 1 comment: 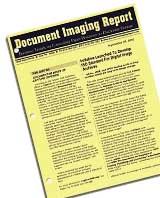